He was born in the town of Sanok, in southern Poland. After studying architecture in Kraków, he returned to Sanok in 1955. Subsequent to this education, he spent several years as a construction site supervisor, which he hated. At that time, he became interested in artistic photography and photomontage, sculpture and painting. He made his sculptures of plaster, metal and wire. His photography had several themes that would also appear in his future paintings, presenting wrinkled faces, landscapes and objects with a very bumpy texture, which he attempted to emphasize (especially by manipulating lights and shadows). His photography also depicted disturbing images, such as a mutilated baby doll with its face torn off, portraits of people without faces or with their faces wrapped in bandages.

Later, he concentrated on painting. His first paintings were abstract art, but throughout the 1960s he made his surrealist inspirations more visible. In the 1970s, he entered what he himself called his "fantastic period", which lasted up to the late 1980s. This is his best-known period, during which he created very disturbing images, showing a surrealistic, post-apocalyptic environment with very detailed scenes of death, decay, landscapes filled with skeletons, deformed figures and deserts. These paintings were quite detailed, painted with his trademark precision (particularly when it came to rough, bumpy surfaces). His highly-detailed drawings are often quite large, and may remind some of the works of Ernst Fuchs in their intricate, and nearly obsessive rendering. Despite the grim overtones, he claimed some of these paintings were misunderstood; in his opinion, they were rather optimistic or even humorous.

His exhibitions almost always proved very successful. A prestigious exhibition in Warsaw in 1964 proved to be his first major success, as all his paintings were sold. In the 1980s, his works gained on popularity in France due to the endeavors of Piotr Dmochowski, and he gained significant popularity in Western Europe, the United States and Japan.

Beksiński eventually threw himself into painting with a passion, and worked constantly (always to the strains of classical music). He soon became the leading figure in contemporary Polish art.

Before moving to Warsaw in 1977, he burned a selection of his works in his own backyard, without leaving any documentation on them. He later claimed that some of those works were "too personal", while others were unsatisfactory, and he didn't want people to see them. The 1980s marked a transitory period for Beksiński. His art in the early 1990s consisted mainly of a series of surreal portraits and a series of crosses. Paintings in these series were much less lavish than those known from his "fantastic period", but just as powerful. In the latter part of the 1990s, he discovered computers, the Internet, and digital photography, a medium that he focused on until his death.

Beksiński always executed his paintings and drawings in either of two manners, which he respectively calls "Baroque" and "Gothic". The first is dominated by representation, the second by form. Among the paintings produced during the past five years, those executed in the 'Gothic' manner have become more and more frequent, so much so that pictures in the other style have almost disappeared.

The late 1990s were a very trying time for Beksiński. His wife, Zofia, died in 1998; a year later, on Christmas Eve 1999, his son Tomasz (a popular radio presenter, music journalist and movie translator) committed suicide. Beksiński discovered his son's body. Unable to come to terms with his son's death, he kept an envelope "For Tomek in case I kick the bucket" pinned to his wall.

On 21 February 2005, he was found dead in his flat in Warsaw with 17 stab wounds on his body; two of the wounds were determined to have been fatal. Robert Kupiec (the teenage son of his long time caretaker), who later pleaded guilty, and a friend was arrested shortly after the crime. On 9 November 2006 Robert Kupiec was condemned to 25 years of prison, and his accomplice, Łukasz Kupiec, to 5 years by the court of Warsaw. Before his death, Beksiński refused a loan to Robert Kupiec.

A 1987 home footage made by renowned Polish painter Zdzisław Beksiński.
Translation and subtitles by Andy Teszner

Next, go to: Tribute to Zdzisław Beksiński - essay by Erik Heyninck 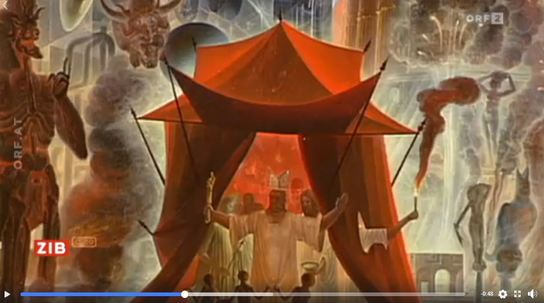